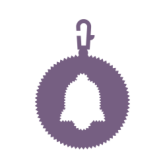 Anonymous messaging systems (and other privacy-preserving applications) often require a mechanism for one party to learn that another party has messaged them (“notifications”).

It would be awesome if we could get an untrusted, adversarial server to do the work for us without compromising metadata-resistance or requiring parties to split themselves into buckets (effectively dividing the anonymity set of the system)!

fuzzytags is an experimental probabilistic cryptographic tagging structure to do just that!

Instead of placing messages into deterministic buckets based on the recipient, fuzzytags allow each message to probabilistically address itself to several parties in addition to the intended party - utilizing the anonymity of the whole set of participants, instead of the ones who happen to share a bucket for a given round.

An implementation of the FMD2 scheme described in “Fuzzy Message Detection”. Using Ristretto as the prime order group.